Art and Culture of Chitrakoot

Chitrakoot is a pilgrimage of Hindus in the state of Madhya Pradesh. It is also called as 'Hill of many wonders'. The city is has its historic association with Lord Rama. It is believed that Lord Rama along with his wife Sita and brother Laxman has spent a large time of his exile of 14 years in Chitakoot. The culture of the town is hence largely affected by Ramayana. The city also holds a special mention in holy book Ramals associated with Lord Rama are celebrated with an extra zeal here. There are many tourist places associated with Ramayana incidences. Art and craft work available are the small wood and stone idols of the lord is a must buy item in Chitrakoot. 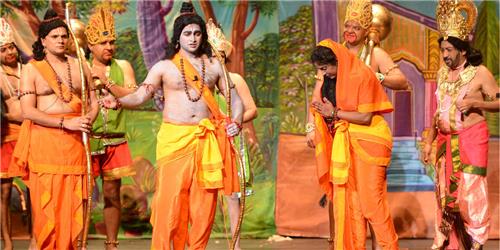 Religion and Languages in Chitrakoot

Chitrakoot is largely inhabited by Hindus. A large sect of people in Chitrakoot follow Hinduism. This holy city on the banks of holy river Ganga celebrates most of the festivals with fervor. About 90% of total population constitutes of Hindus, while others religions found here are Muslim, Jain, Christians, Buddhists, and Sikhs. Muslims form the second largest sect, while other sects like Jain, Christians, Buddhists, and Sikhs forms the minority here. Hindi is the official language of Chitrakoot. Most of the people here speaks hindi. Bagheli and Bundeli, are the regional language spoken in Chitrakoot. Bagheli has its lexical similarity of 72-91% with Hindi. Bundeli is also a hindi dialect.


Fairs and Festivals in Chitrakoot

Because of its linkage with Lord Rama, festivals related to Lord Rama are celebrated with great enthusiasm. Some of the important festivals celebrated here are Diwali, Dusshera etc. Badhai, Rai, Saira, Jawara, Akhada, Shaitan, Dhimrai are the famous folk dances practiced in Chitrakoot.

National Ramayana Fair is celebrated every year at the end of February or in early March in Chitrakoot.This fair is very popular the entire Ramayana, with over 24,000 couplets, is recited here during this fest. Ramayana was written in Sanskrit, and later on was translated into various languages. Ramayana was written by Sage Valmiki in 4th century BC. That time epic was meant to be secular. By the time Ramayana was completed it turned out into a scripture.

Diwali, is one of the most famous festival celebrated in entire country. It is also called as the festival of lights. Diwali or Deepawali is celebrated to celebrate Rama’s return to his home along with his wife and brother after a 14-year long exile. The festival is celebrated with a great zeal in the month of October or November. The celebration and preparations for the festival starts much before time.
Diwali is being celebrated since ancient times, when local rulers celebrated Diwali with great zeal and thousands of people used to be the part of celebrations. Diwali these days is celebrated by lighting up houses and offices with lights, diyas and candles. By burning crackers, without which Diwali seems to be incomplete. Tradition of making rangoli( and art made usually on floor using different colors) is very famous. Diwali Puja also has its own gleam. The festival is celebrated with a lot of energy and enthusiasm in Chitrkoot. The whole city seems to be lightened up by lights and Diyas as it is believed that when Rama returned to Ayodhya, the city lightened by diyas to welcome him. It can also be called as a festival of sweets as people make many different variety of sweets and exchange them with their friends and relatives. In recent times the chocolates and dryfruits have exchanged the age old traditional delicacies.

The festival of Navaratri, is dedicated to Goddess Durga , goddess of Power and Prowess. Navaratri is observed twice every year, one in the month of March and other in October before Dusshera. It’s a nine day festival celebrated with high spirituality. During the Navaratri people observe fasts. On the 10th day of October Navaratri, the festival of Dusshera is celebrated.

Dusshera is celebrated in Chitrakoot to signify the victory of good over bad. On this very day Lord Rama killed the Demon Ravana and rescued his wife Sita. Dussehra is celebrated by burning Ravana’s effigy. Kumbhakarana, and son Meghnad, effigy are also burned along with Ravana at dusk. Before it are conducted some ritual offerings in temples. Rama Lila, is an integral part of Dusshera. It is an enactment of a part of Ramayana. Dusshera is celebrated with great zest in Chitrakoot.

Ramanavami is celebrated to celebrate the birth of Rama. It is one of the most important festival celebrated in Chitrakoot. The temple bells can be heard all over the town on the day. Ramanavami day starts with Bathing in the cool waters of the rivers Payaswini and Mandakini An annual fair is organised on the eve of Ramnavami, which is accomplished with the folk songs and dances.

Comments / Discussion Board - Art and Culture of Chitrakoot