Chitrakoot an important historical place is a part of Bundelkhand region. Since long times Chitrakoot has been very famous. "Chitar" in Chitrakoot means cheetal (deer). Because of the presence of deer people it is called as chitar kot.This famous region has been part of Indian folktales and folklores for time immemorial. Sage Valmiki has beautifully described Chitrakoot in his Ramayana. Chitrakoot holds a very significant position in Hindu mythology as Lord Rama along with his wife and brother has spent 11 and a half years of his exile at this place. It holds the honor of being associated with Lord Rama. 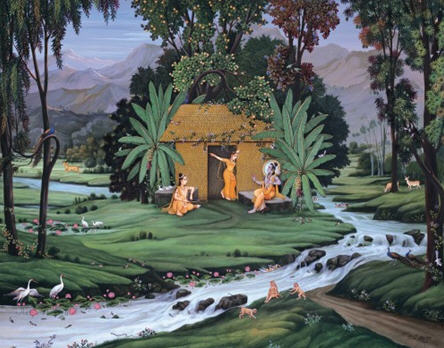 The place is beautifully mentioned in Ramayana. Chitrakoot has been said to be once visited by all God and Goddess. The Hindu trinity Brahma, Vishnu and Mahesh took their incarnation here. In medieval times Chitrakoot was under the Chandela dynasty and later under Maratha Rule. During the British rule the British took over the control Of Chitrakoot from Maratha ruler in 1802 which remained there till 1947. In between there are successive wars of conqueror of Chitrakoot.

Chitrakoot being associated with Lord Rama is a pilgrimage center for Hindus. Lord Rama along with his wife and brother has spent 11 and a half years of exile in Chitrakoot. Chitrakoot is associated with a number of famous incidences of history. Some of the great sages like Maharshi Markandeya, Atri, Sarbhanga, Sati Anusuya etc. meditated here. Sage Atri and Sati Anusuya were blessed with the incarnations of hindu trinity Brahma, Vishnu and Mahesh. This is the place where all the God and Goddess visited while Lord Rama performed Shuddhi ceremony of his father. Bharat also came to Chitrakoot to persue Rama to take back the throne of Ayodhya after the death of Dashrath. Hanuman also brought the news of Sita been imprisoned by Ravana in Chitrakoot only. There are many historic places standing erect and reviving the ancient and glorious past of Chitrakoot. Many writers and poets have written beautifully about the Chitrakoot.

In 1802 after the treaty of Bassein, the area came under the British rule. Many local rulers were thereafter granted the leases to the lands by the British in lieu of signing a written agreement of allegiance. In 1818 Third Anglo-Maratha War, the Peshwa of Pune ceded all his rights over this region. In 1811 all the leased states were organized under the British rule. In 1849 this area came under Commissioner for the Saugor and Nerbudda Territories. Sometime later the authority came under the Resident at Gwalior. It remained till 1947.

Comprising of Karwi and Mau Tehsil a new district was carved out from Banda district on 6th May 1997 in U.P. named Chhatrapati Shahuji Mahraj- Nager. It was later on 4TH Sept 1998 came to be known as Chitrakoot. It lied in the northern Vindhya range of mountains extending in two states of Uttar Pradesh and Madhya Pradesh. It lies in the Chitrakoot district of Uttar Pradesh and district Satna on Madhya Pradesh. It is a place of rich heritage, culture and history largely visited by a number of Tourists.

Comments / Discussion Board - History of Chitrakoot